Cockpocalypse of CAM4: The Four Horsemen 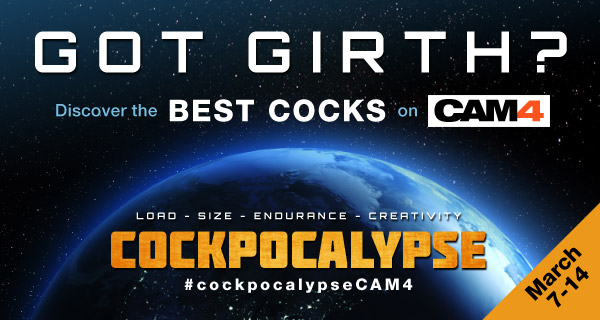 We don’t celebrate cock enough, but that’s not to say we’re in the dark ages of dick because every day on CAM4 there’s thousands of cocks in all shapes and sizes. From March 7th t0 14th we’re uncovering not only the best cocks, but all cocks. We encourage all men – gay, straight, boyfriends husbands, lovers, solo, couple, to be a part of Cockpocalypse.

Four Horsemen of the Cockpocalypse:

Creativity: For those who can paint with their dick, dress it up, or do tricks.

How to Join the Cockpocalypse of CAM4:

Step 1: Schedule a show during March 7th to 11th, include “cockpocalypse” and the name of the challenge you’ll be doing in the description. For example: “cockpocalypse load challenge”

Step 2: During the show, show us why you should be crowned a Horseman. We will be watching and so will our viewers.

A schedule of the Cockpocalypse shows will be hosted on CAM4 so viewers can watch all of your shows. Along with the show schedule will be a voting poll, so remind your viewers to go to blog.cam4.com/contests/cockpocalypse-of-cam4/ ‎and vote for you!

The Four Horsemen of the Cockpocalypse will be announced on Monday, March 14th. Each of the Horsemen will receive a thick cash prize of $200.

1. Must be an approved CAM4 broadcaster

2. Must specify in your scheduled show description the challenge you will do

3. Must be a CAM4Bucks member to be eligible for the prize

4. Any means of fraudulent voting will immediately disqualify you

How long will it take? – “cockpocalypse endurance challenge”

Cockpocalypse Creatività! We will astonish you with an eccentric cock show!

Disclaimer: All members and persons appearing on this site have contractually represented to us that they are 18 years of age or older. © © Copyright Granity Entertainment DAC, 2007-2019. All Rights Reserved. 18 U.S.C. 2257 Record Keeping Requirements Compliance Statement